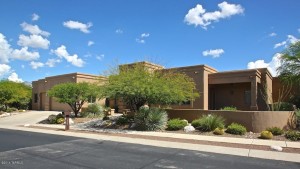 TRS built 4516 N Black Rock Drive as one of the first ridge-top homes in Sabino Mountain in 2000. That it would later sell for only 750K, 15 years later, is surprising. The List Price started at 899K last fall and had a few price drops before it went under contract– by the Listing Agent Keller Williams Southern Arizona. This 3,735 square foot semi-custom home is sited on just over an acre and a half.